Every Sunday the Wayward Moto Gear crew always make a point to get together and spend some time on the open road. In these blog posts, we talk about some or our adventures traveling the mountain roads of North Georgia, Alabama, Tennessee, and beyond… 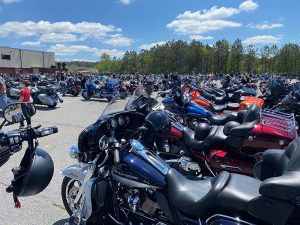 We decided to start the day by hopping on the bikes and heading up to southern devil Harley Davidson in Cartersville. Today was a swap meet with a lot of vendors and entertainment like live bands and giveaways. Southern devil Harley Davidson is a popular destination stop for anybody that rides in North Georgia. On Saturdays and Sundays they get a steady amount of traffic from people heading out or heading back in. It’s also a popular place to meet up. That was our plan. We have three groups of riders meeting up there today. The plan after we are done at Southern devil yes for our group to start heading north and do a little mountain riding.

Anyone that rides in a group knows that were the most difficult things that you can do let’s get everybody motivated and together on time in the morning. That’s the case again today as we’ve got two riders that just either won’t get out of bed or conveniently forgot how to work an alarm clock. No worries, getting out a little later than Expected but looking forward to an amazing ride. It’s a sunny day and the temperature is 70° so you can’t ask for much more than that. I also have my favorite passenger with me today, my daughter, so I’m looking forward two a lot of great music and a lot of singing as were riding down the road. I installed a new TPS on my street glide yesterday so I am looking forward to seeing if it is helping with a intermittent stalling problem that I have. More on that later. I’ve tried damn near everything else to fix the problem and ran every test imaginable so I’m hoping this will do the trick.

Made it to Southern Devil 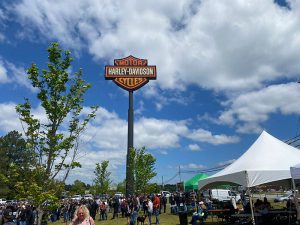 We had a great ride to Cartersville. Cruised up hwy 20. Smooth sailing all the way. Great turn out at the swap meet at Southern devil Harley Davidson. There were hundreds of people and a decent amount of vendors. A lot of good deals to be had in fact a buddy of ours just got all the pieces to upgrade his engine to 114 at a great price. Now we just have to figure out how to get it home.

The entertainment at SDH was great. The trick riders they had were a big hit. Doing some tandem riding tricks and solo tricks got the crowd going. Some of the tricks are truly amazing. They had a ramp setup in the back of SDH who which I could not wait to see how they were going to use it. If they did not have it roped off I could take the street glide for a run it. (LOL).

I personally was looking for seat upgrade as mind has got a little wear and tear on it but no luck for me. Oh well maybe next time. One vendor had a nice assortment of vintage souvenirs from past rallies. Included were a few vintage Sturgis Motorcycle Rally patches and even a couple of vintage Sturgis T-shirts.   Speaking of motorcycle T-shirts, One of the guys in our group is representing wearing his favorite wayward motorcycle T-shirt. 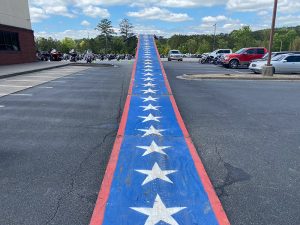 Southern devil Harley Davidson has a pretty big show room and a large assortment of motorcycle clothing and motorcycle gear. If you want any type of T-shirts, button-down shirts, or motorcycle jackets with a Harley Davidson logo on it seems like they had it. Of course it wasn’t very cheap but that didn’t stop what seemed like hundreds of people from grabbing stuff and getting in line and throwing down good money.

After a good time at the swap meet it was time to hop back on a ride and head out tear up some of those curvy country roads. One of the guys in our group as vast knowledge of the back roads in North Georgia so we spent about an hour or so kicking around and exploring new routs.

It was a great ride as he went down a few rose off the beaten path that I never been on. At this point it’s hard to find a decent road that I haven’t been on in North Georgia as I have put in a lot of miles on my bike in these parts. The guy that was leading us show me what he was doing. He almost missed the term at one point I’ll be corrected the mistake at the last second. That got a little hairy as you can imagine but no harm. 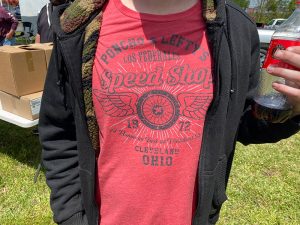 After pushing it for a while on those back roads we ended up at buffaloes in Canton Georgia. Felt that was a good enough place as any to go ahead and pick up some lunch kick kick back for a little bit.

All in all it was a pretty great day out on the road. Heck, any day where The sun is shining and you’re out riding motorcycles is a damn good day. Oh, I almost forgot to mention how the TPS worked out. Seems like it may have done the trick. We rode pretty hard today and my idol when I came to a stop or solid and consistent throughout the entire trip. Fingers crossed that fixed my motorcycles idling problem for good.