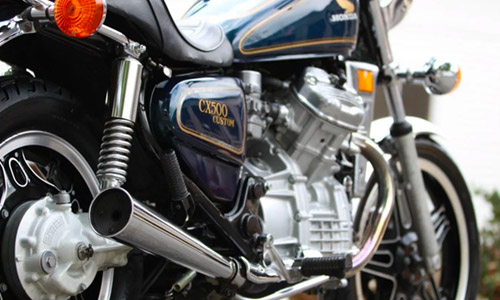 In 1997 I got my first motorcycle. It was a 1979 Honda CX 500. I don’t remember how many miles were on it, but both mechanically and cosmetically it was in fantastic shape. I have to say it was a great starter bike as it both ran well and handled well and even had a little bit of a cruiser feel to it right down to the comfortable two up seat with the ridiculously tall banana seat style passenger back rest. At the time I was living in Gainesville Florida and I thought a motorcycle would be the perfect vehicle to get around town easy and also save on gas. So the primary function of this place was to get me to school and home after work seven days a week.

Funny thing happened along the way though. The bike performed admirably as a functional transport and save me a lot of money on gas as expected but I soon begin to appreciate the motorcycle as much more. I found myself Ever increasingly looking forward to hopping on my bike and cruising the back roads outside of town to clear my head and relax after a long and stressful day. I can say that that is truly where my appreciation for riding motorcycles began.

That old Honda served me well and I have many fond memories of it. Honestly, I wish I’d never sold it. I still have photos of that old bike up in my home and nothing would make me happier than to somehow find that old beauty again. But you know how it goes motorcycle time, we have big eyes and sticking with one motorcycle is usually never the road we take.

As I got more and more into motorcycle riding I became friends with other riders and started to take part in many group rides. Group rides then led to me attending motorcycle rallies such as Daytona Beach bike week and Daytona Beach Biketoberfest.  Riding with others and being around so many different motorcycles made me quickly realize that my little Honda CX 500 was not going to satisfy I love for motorcycles any longer. That’s what happens to many riders that lead to many years of transitioning from bike to bike. Often it was the same story, I would get a bike and begin to fix it up and get it to a point where I was happy with it. I would get that wonderful feeling of thinking that I’ve done everything that I can to make the bike everything that I wanted and I would be so satisfied. Of course that is win another bike would catch my eye and I would begin the entire process over again. This leads me to my first Harley Davidson. 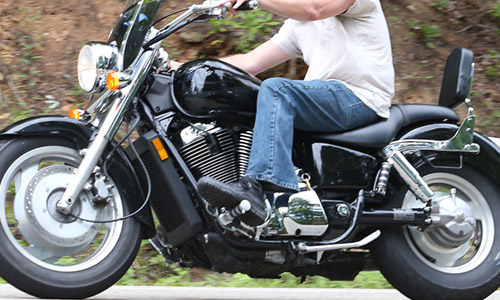 As a biker I had always had An appreciation for Harley Davidson. The Classic styles and the iconic sound of Harleys are difficult to beat. However I have never been the most mechanically inclined person in the entire world. Don’t get me wrong, I love working with my hands and building things but working on engines has never been one of my favorite things to do. Harleys, especially older ones, have a reputation for having engines that require a little tinkering every now and then. The thought of that always put me off so I instead stuck with some of Harley‘s foreign competitors, which sold the promise of being a much more maintenance free and turnkey experience. For the most part every Honda that I have a phone delivered on that promise. The dependability of each one of my Hondas was rock solid and hassle free. However I never had a feeling of 100% satisfaction and I never had a bike that I just felt extremely proud to ride. 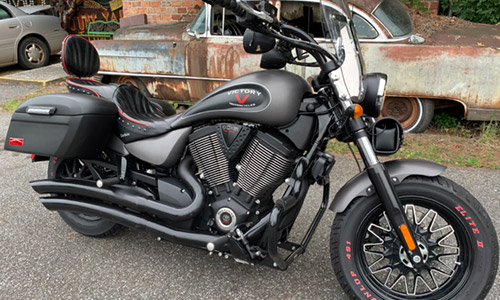 I was so extremely excited when I finally discovered victory motorcycles in 2014. I had heard about victory before then and I have seen them around and was impressed with their unique stylish design but I never took the time to really research them. In 2014, as fate would have it, I got a chance to take one for a test ride and I was sold. The freedom 106 motor on the victory had plenty of power and was extremely responsive and I just love the way the bike looked and handled. I soon bought a 2015 victory gunner from a motorcycle dealer in Alabama.  Everything about the bike was rock solid. I finally had that feeling of total satisfaction with a motorcycle and thought that this was the bike that I would have for many years to come. And then we all know how that ended. Polaris pulled the plug on victory and my heart was broken. I still loved the bike, but the thought of a wing bike that was being phased out why it’s manufacturer and the looming issue of being able to find parts and service killed it for me.

At this time my son was working at a motorcycle and scooter dealer in Marietta Georgia and he called me with some exciting news. His shop had gotten in a 2007 Harley Davidson St. glide on trade if you weeks earlier and his shop wanted to move it quickly. The dealer he worked for primarily specialized in overseas model motorcycles such as Moto Guzzi and Royal Enfield so having a Harley Davidson Street glide in stock was not something that appealed to them. It was a really cool dealership with all types of Italian and European signage, imagery, and products but a used Harley Davidson stuck out like a sore thumb amongst the euro design, Italian flags, and European motorcycle shirts. 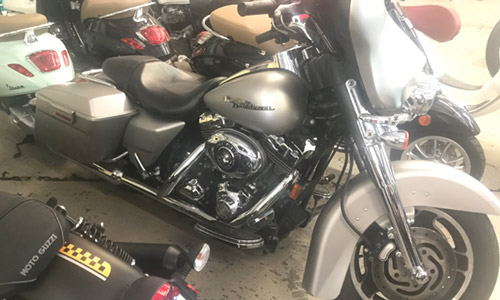 With some hesitation I decided to go down and check the bike out. After taking it for a test ride and negotiating a price that fit my budget I decided to pull the trigger and buy my first Harley. That is where I began my journey into the Harley life. Though the street glide was a 2007 model it Add low mileage and was garage kept. That’s good news. It only had 13,000 miles on it and even the tires were still in good shape. However, the owner was a novice rider and lost interest in the bike and it showed as the bikes exterior suffered from many years of neglect.

There were numerous bangs and scratches all over the bike where it was obvious that things either fell on the bike inside of his garage or were just carelessly stacked on or banged against the bike over the years. The bike even showed signs that at one point it was knocked over off of its kickstand in storage. There were no scratches on the bike that would make you think that the bike was dropped while moving, however there was a sizable dent in the underside of the fuel tank wish gave you the clue that it fell sideways with some sizable force.

So in getting this bike I was very aware that I was going to have to improve and fix a lot of things to get the bike to resemble anything that I was remotely satisfied with. Over the next month I will be discussing various improvements and upgrades that I made to the bike to get it to where it is now. Please check out my blog for part two where I begin the  task Of whipping that 2007 Harley Davidson Street glide into shape